The Difference Between Bulging Disc and Herniated Disc

Before we dive into the details of a bulging disc and herniated disc is important to understand the basics of the spine and disc anatomy.

Spine Anatomy: Your spine serves the essential functions of providing your body support and structure, allowing you to stand, bend, and twist. The spine also protects your spinal cord (part of your central nervous system) which is a highway of nerve signals allowing you to move and feel sensations. The spine is comprised of 33 bones which are divided into three major sections:

Each vertebra is separated by a fibrous intervertebral disc (IVD) which is made up two parts:

When your spine moves the discs in your adjust slightly to support the vertebrae. For example, when you bend over the anterior (front of your disc) compresses and the posterior (back of the disc) stretches.

REGIONS OF THE SPINE 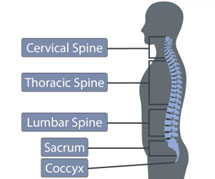 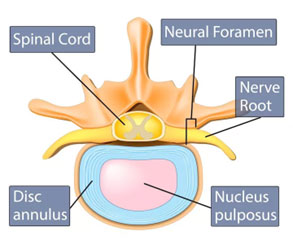 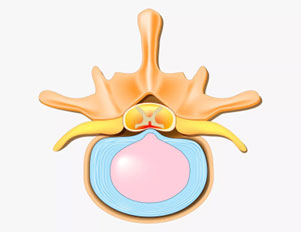 What is a bulging disc?

Unlike a herniated disc, when the nucleus breaks through the annulus, a bulging disc protrudes outward but the outer layers of the annulus remains intact. However, because the disc protrudes into the spinal canal, it can still compress a nerve root. Disc bulge is also called disc prolapse. 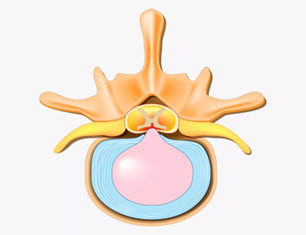 What is a herniated disc?

When a disc herniates, the soft nucleus spurts out through a tear in the annulus. Because there is limited space in the spinal canal, the nucleus can compress a nerve root or the spinal cord. The nucleus can extrude into the spinal canal, foramen, on either side of the disc, or in some rare cases, in multiple places called multifocal extruded discs. Typically, a disc that herniates is in the final stages of degeneration. Although herniated discs can occur in any area of the spine, they are more common in the lumbar region. 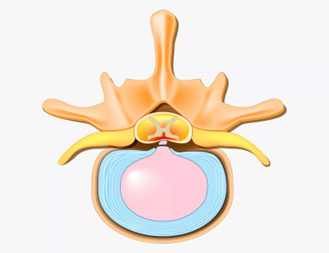 In some cases a piece or pieces of the herniated disc might break off, these are called free fragments. A free fragment, also known as a sequestered disc, can break off in the spinal canal and apply pressure on the spinal cord which can result in severe pain and injury.

Types of Herniated and Bulging Discs

Herniated and Bulging discs can occur in the Cervical, Thoracic, or Lumbar regions of the spine.

Herniated and Bulging discs can also be classified by the area of the disc they protrude into (herniation zone). 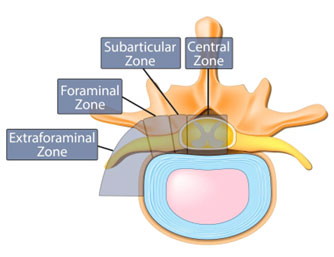 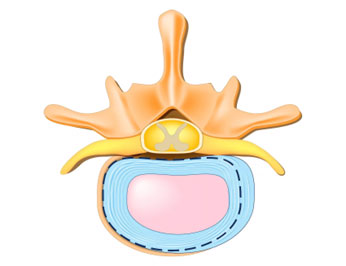 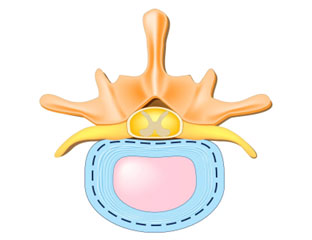 Overall, symptoms of a herniated disc include: pain throughout an arm or leg, burning or tingling sensations in the affected area, muscle weakness, pain that worsens after pronlonged sitting or standing, pain or numbness that radiates down one side of the body, pain that becomes more severe during the night or Imparied ankle or knee reflexes. Herniated disc pain may be mild to severe.

Symptoms by Region of the Spine

Herniated Cervical Disc(neck): Pain shooting down the arm to the fingertips, numbness, tingling, or weakness in the shoulder, arm or hand, difficulty walking or maintaining balance or problems gripping or handling things.

Herniated Thoracic Disc (upper and mid-back): Pain from the lower neck to the mid-back, chest pain, headaches when lying down, difficulty walking, tingling, numbness, or burning sensation in the legs, weakness in the legs or problems with the bladder or bowels.

Herniated Lumbar Disc (lower back): Pain in your lower back, buttocks, hamstring, calf, or feet, numbness or tingling in the affected leg, shooting pain down you leg, weakened leg muscles, burning or sharp pain in your leg that worsens when standing long periods of time, difficulty controlling the bladder or bowels, difficulty walking, abnormal ankle and knee reflexes, poor coordination, difficulty lifting the feet or cramping in the lower back or legs.

Causes of a Herniated Disc

The most common cause of disc herniation is age-related wear and tear. This is known as disc degeneration. As your body ages, the amount of water in your vertebral discs decreases, making them less flexible and more prone to tearing. Certain motions, such as twisting, turning, or lifting can also cause a herniated disc. Although less common, an injury such as a car accident or a blow to the back can cause a herniated disc.

Causes of a Bulging Disc

Like a herniated disc, the most common cause of a bulging disc is degenerative disc disease. A bulging disc may also be caused by neck or back strain brought on by repetitive movements, lifting heavy objects, and poor posture. This condition can also be caused by trauma such as a blow to the back, although this is rare.

Risk factors for these conditions include:

Our goal is for you to leave our office with a memorable and enjoyable experience, which is why our welcoming and compassionate staff will do everything they can to make you feel right at home.